For this genus there are no many cultivars as for Sempervivum.
For most of them we don't know the breeder or the year of introduction.
There is no complete list of known cultivars...

Orostachys boehmeri 'Keiko'
is maybe the most popular Orostachys cultivar. It is marked as cultivar but i can't find the origin or the information
is it a cultivar at all or just a natural form of the species.
I also don't know what makes him different from regular O. boehmeri.

Orostachys 'NYBG'
I saw this species at http://www.succulents.jp/photolist_orostachys.html for the first time. It looks like O.fimbriata.
NYBG= New York Botanical Garden
It is marked as cultivar but i rather think it is a form of O. fimbriata that is cultivated in NY Botanical garden. I will contact the gardens for more info.

you can buy this plants in Japan: http://www.agreeable.jp/eshopdo/refer/vidSUOR00000901.html
or in Canada: http://www.wrightmanalpines.com/details.asp?PRODUCT_ID=O041

I saw this plant for the first time in Ray Stephenson's: Sedum-cultivated stonecrops book (page 176). It was marked as Sedum 'Yatsugashira'.

I also found some info that say that name yatsugashira is japanese word for Orostachys erubescens var. polycephalus.
http://wildflowersshimane.web.fc2.com/Plates/Orostachys_erubescens_var._polycephalus.htm
http://www.florestadesuculentas.com.br/blog/2010/05/orostachys-erubescens/

I've found this on the same blog where i found picture of 'Yatsugashira': http://www.cactusosada.com/index/cat4326986/

I couldn't find info about any of these cultivars. I also don't know are those plants in a private collection of this lady.
Is someone maybe a member of this forum or has an idea how to contact this person who made the list?

Saw it only in Sedum society exchange list: www.cactus-mall.com/sedum/2011ExP.doc

http://haworthia.jp/aerialgarden/orostachys%20pages/genkai.htm (other name but probably the same plant?)

The same plant as 'Houou'?

Mr. Ed Skrocki was a famous plant collector and breeder. He made many known Sempervivums but also made some Orostacyhs cultivars. Unfortunately mr. Skrocki died this year.

Does anyone have info about his Orostachys cultivars?

Mr. Jack Broxholme ( http://www.cavendishperennials.com/) from Canada got unnamed seedling from mr. Ed Skrocki.
He named it 'Peach Perfect'.
It could be true species but it's more likely it was one of countless unnamed hybrids from mr.Skrocki.

Unfortunately mr. Broxholme lost his plants one winter but they can be still found in other nurseries and private collections.

About a week ago i bought this O. spinosa from Mr. Hrvoje Belić (who has largest cactus and succulent collection in Croatia).

It looks like it's crested. All of the plants that Mr.Belić was selling had this irregular center so I think that this mutation could be stable.
We'll see on the offsets. 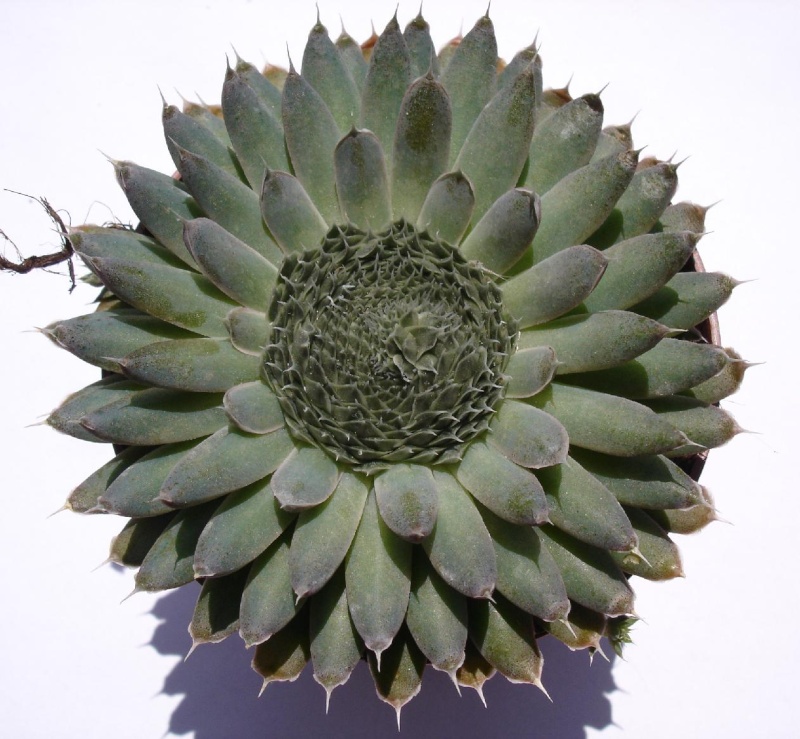 and here is a closer picture: 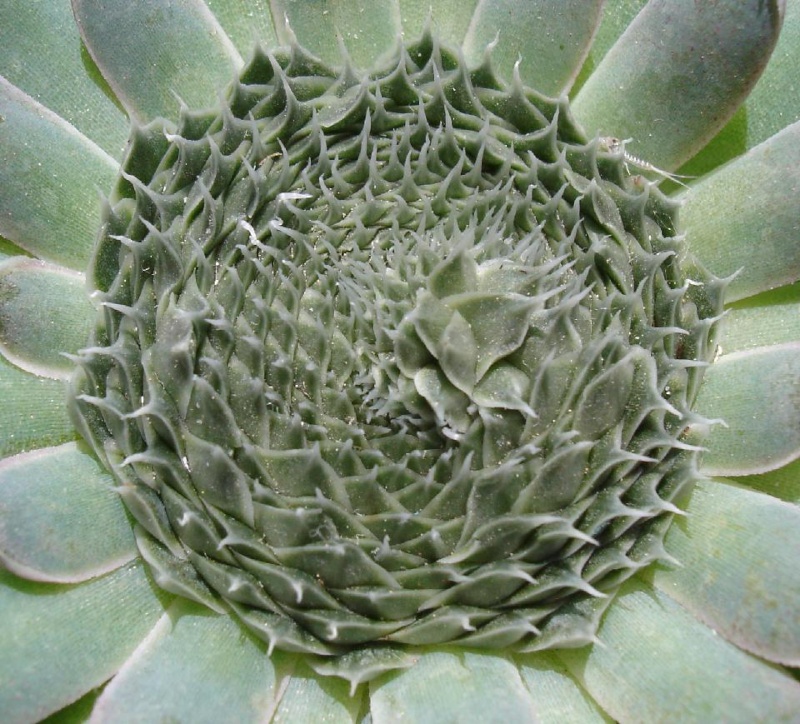 There's definitely something strange (UNUSUAL!) going on in the middle of the plant!

Is this really a crest? I think this is a certain stage in this plant's growing cycle where it is switching to a different growth--because of the season or oncoming flowering, I forget, but I'm pretty sure i have seen this in pictures before...

I think this is a crest. My other plants have regular inner leafs. I also saw something similar on pics but that can also mean that crested form
is not so uncommon in cultivation.
One of the possibilities is that this plant was forced (with fertilizer or even hormones) to grow faster, so center is not symmetric.

I have one other plant labeled as O.spinosa f cristata / var. cristatum.This plant looks normal, but flowers should be crested.

I honestly hope this is a permanent mutation for crested rosette

One year later, mystery is solved: My plant is crested

The only question remains is if this mutation is stable and I could tell that when the offsets grow up. 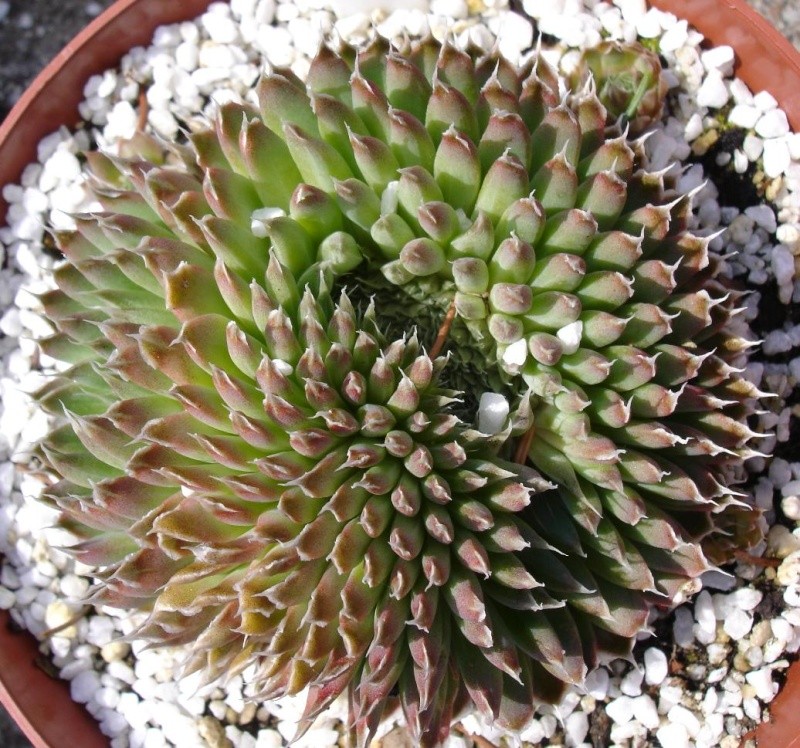 And I forgot to say that I became an owner of this tiny jewel called
Orostachys 'Yatsugashira'. This is one of my favorite plants.
(sorry for bad photo quality) 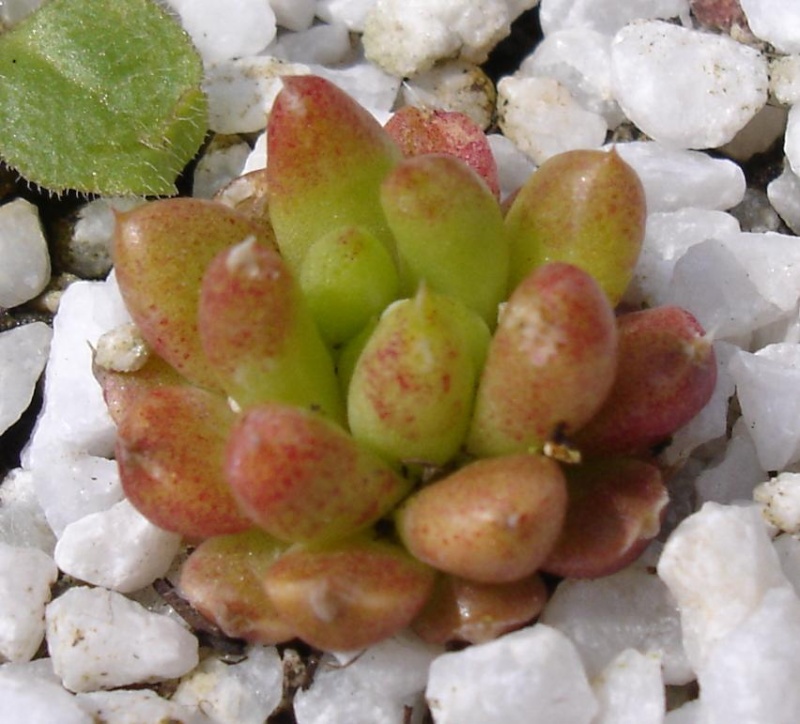 If you google pictures for name 'Yatsugashira' you will get pics of a bird
Upupa epops (Eng:hoopoe, Croatian:pupavac), but you will also get pics of taro root.

Japanese name is 八つ頭 and if you try to translate it with Google translator in English (or Croatian as well) it means eight head.

It all seems a bit confusing...it's because it is. I hope someone can explain this better. I suspect that Japanese words for taro root and for hoopoe bird are the same and can be written with (at least) 2 Japanese alphabets that makes confusion for us..for me.

Anyway, regardless the origin of it's name this plant seems cultivar of O.japonica and sometimes is even called Orostachys japonica 'Yatsugashira'.
As I've said in previous posts there is a form of this species called O. japonica f. polcephala (O.polycephala) that looks very similar. I've never seen this form in real life but to me it looks bigger than 'Yatsugashira'.

This strange form is a result of winter growth and elongation.
I bought this plant in a bad shape (there was only 1 central rosette). It seems it overwintered indoors in garden centre, I felt sorry and bought this plant.I was very surprised at the same time because I found Orostachys spinosa in Croatia, although I already had this species (bought abroad of course)
Plant recovered and rewarded me with this great scene 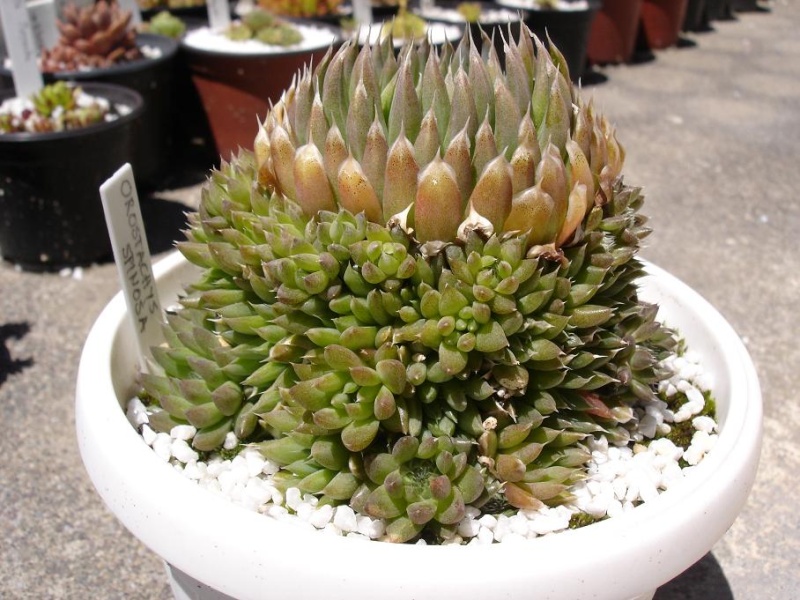 I forgot to put some scale :( . You have to trust me that this is a large plant..gigantic

In my opinion there is more than just O.malacophylla in this hybrid (if it is a hybrid at all).
Similar species that are rarely cultivated like O. maximowiczii and O.paradoxa show this vivid
colorations and are more monocarpic than O.malacophylla. 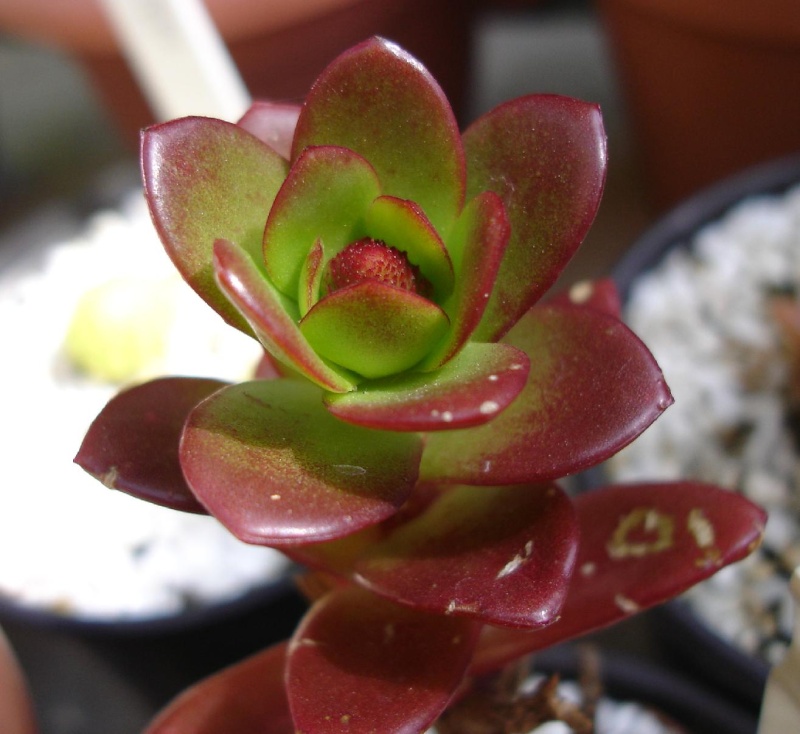